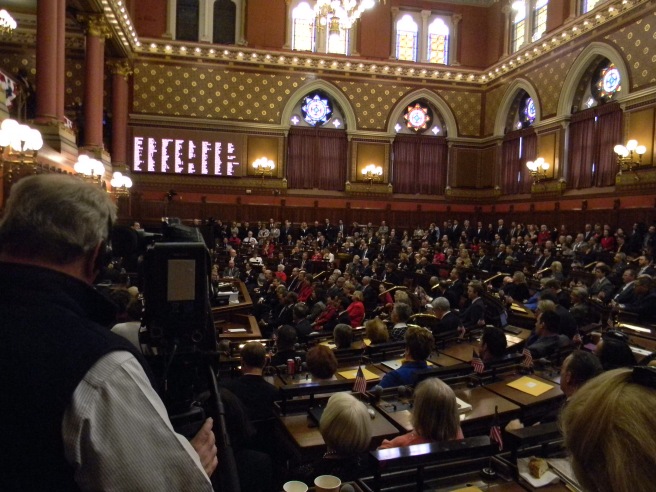 Last week was a whirlwind for me. A last minute story assignment led me to shadowing a state representative and standing in the Connecticut house chamber witnessing the swearing in of the house and Governor Dannel Malloy’s state of the state address.

The mood in the capitol was different than what I expected. While the legislators were recognizing the work ahead–the tragedy in Sandy Hook cast a shadow on the day–the legislators joked with each other, gave each other advice and called themselves close friends and family.

On the first day, representatives were learning the proper procedure for conducting government. When former House Speaker Chris Donovan listened to the roll being called, one representative stumbled when he recognized his name. Donovan just told the representative “present” or “here” are acceptable procedure when responding to a roll call.

When Donovan gave his parting speech, he said he was proud of what the house accomplished, and he told the new representatives they would find some of their closest friends among the politicians gathered there.

When Cafero and House Majority Leader Joe Aresimowicz nominated J. Brendan Sharkey as Speaker of the House, both talked about how the man was a policy wonk and a prankster.

Sharkey was sworn in and he told the legislators that when a group came to escort him to the house floor, he hid in his bathroom in the capitol.

And of course, the legislators brought their wives, mothers and children to witness the first day.

During the Finance, Revenue and Bonding Committee, the representative from Manchester, Jason Rojas, held one daughter on his lap while his other daughter drank a soda by his chair.

Little things, yes, but it’s a side of the legislature we don’t see through political news reports.

View all posts by Daniel Jackson